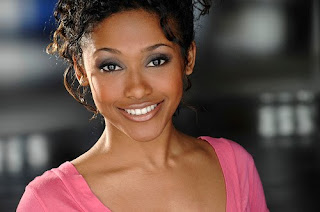 Sitting in the audience, watching “Girl’s, Girl’s, Girl’s,” a craftily written and candid satire by Marjuan Canady, is like sitting in my living room during a get-together, dialoguing with a bunch of girlfriends. It is sidesplitting deliberation, reflecting on the latest and greatest topics including celebrities, entertainers, fashion, news and politics…but with an angle. Aside from amusing recreation, you don’t immediately feel as if you have absorbed much from the exchange as its depth is less obvious. But, if you listen longer, you would realize the profundities spoken throughout the hysterical commentary.
In her first ever written, comedic, one-woman play, Canady uses pop culture as the basis of her social commentary regarding the media. Canaday does this from varying perspectives; men, women, White people, Black people and Latinos, just to name a few. She transforms herself into ten diverse and relatable characters through which she tells the story of how the public – her main focus being black women - are controlled by the media. She draws from her various life experiences to play all of these different characters, in which she questions what it means to be a black woman.
The fictitious story revolves itself around the life of a girl named Rihanna who is preparing to audition for the lead role in the new music video of rapper, 40 Ounce’s new hit, “Gutta Money, P**** and Rim Chicks.” Using witty lines like “encouraging fathers to leave their daughters so they can develop strength at an early age,” Canady catches your attention and keeps it. From playing a prostitute turned author, who tells what it is like being a ‘hoe’ in her new book, “Confessions of a Super-throat,” to playing a girl who is trying to prove she can be the hottest white girl on the set of a music video, Canady uses these and other brilliant characters to express herself through her writing, which stemmed from her anger at women in mainstream hip-hop and leadership positions. 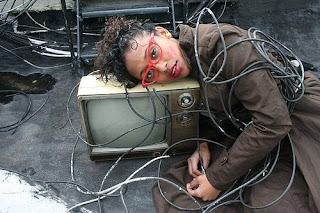 “I became upset at women like Ophra Winfrey and a few others…not so much upset [at them], but the limitations they have as women in the public and

having so much power. What they can talk about, what they can’t and even how politics plays a part in the type of news they deliver.”

Being of mixed race, Canady says her own politics has influenced her to write this play as well. As an Afro-Caribbean American, she is comfortable in her skin. She doesn’t choose one race over the other, she says. However, she relates more to being black, but often questions what it that means.

“It’s a lived thing, a cultural thing. Another element in the play that is thrown in your face [is] particularly what it means to be a black woman and the politics that go along with that. What it is to be a darker skinned black women, and a lighter skinned black woman, you know, and what comes with that. As a browned skinned women with ‘good hair, ’ I get certain privileges or certain [acting] roles. I get asked all the time ‘what are you?’ Having my identity always questioned and on the table, I decided to write about it in the play. Everyone’s identities are questioned. All of the characters and how they relate to black women are all very different. Some are negative and some are positive. Some use black women to justify their own actions. It’s a play that looks at where black women would be ten years from now if we keep going the same way we are going in the media. It focuses on the image of black women throughout history and how we all play a role in it.”

In crafting what I feel is a well-written play, Marjuan Canady used television and people-watching on the subway to help her form her characters. In addition to that, Director/playwright Noelle Ghoussani, simply, but brilliantly staged this production and helped with developing the through-line of the story to connect all of the characters. The production also integrates multimedia videos, allowing smooth transitions and aiding to the commentary of women in the media by allowing the audience to see young women in the act; making women question why they objectify themselves. 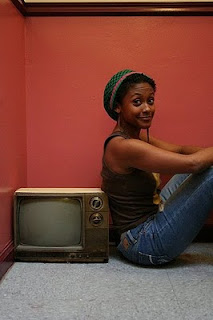 “I used a lot of social gazing and improv; asking myself a lot of questions. I also used a lot of material that came from actual women auditioning for rapper/producer Diddy and Plies. Even from my own experiences of some of the things they ask in the audition room. [Requests] like ‘do your tricks’ or ‘take your shirt off,’ … just the degradation that goes with putting yourself out there as a woman.”

Marjuan’s future plans are to target three main audiences: the community centers-to foster more dialogue for people who can’t really afford to get into theater; colleges – to go on a college tour to perform for students and have dialogue in hopes that young people will be a little more active in talking about issues that are important and stand out to them; and going to different festivals to continue receiving commercial appeal. Marjuan also plans to work with the Bronx Brotherhood project, a small non-for-profit organization that works with Black and Latino male teenagers. Her hope is to perform the play and open discussions about what it means to be a man and have relationships play a part in their identities, as well as to discuss sexism.
From the writing and media, to the directing and acting, Marjuan Canady’s play, “Girl’s, Girl’s Girl’s,” delivers engaging storytelling with wonderful characters that we are all probably very familiar with and can most assuredly relate too. All of these things definitely make for first rate theatre experience.
You can learn more about Marjuan on her website, “LIKE” her on Facebook and follow her in Twitter!