Hey Filmmakers!
Join me and my partner Ashley Shante' of Dear Diary Productions on this Google Hangout Panel with ASPIRE TV!

We will be discussing filmmaking and how its been to work with Aspire Network. 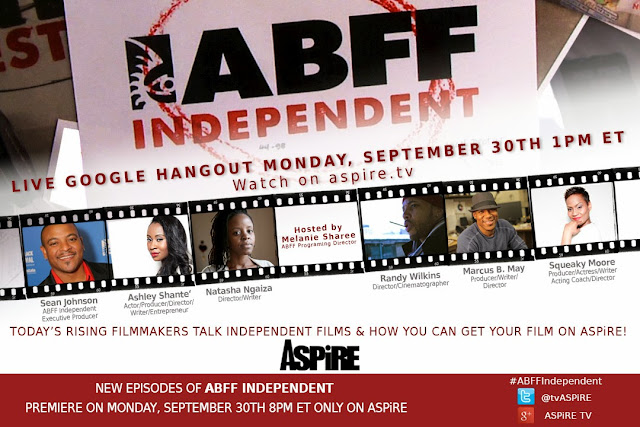 Tip #1- Always look for an opportunity to show your personality in your commercial audition.

Have you ever wondered what it was about the "Progressive Lady" or the "Glorified Popeyes Chicken Lady", that made them book the job and become the face of those commercials?


It's because they brought their personalities.  They brought themselves to the audition!  It's true!  Noone can do you better than you!  The progressive lady, I'm sure brought her quirky, off beat personality to that room.  It's probably not even an act!  That is probably who she is in real life.  And the Glorified Popeyes lady, is a true Sistagirl!  And she brings it out in every commercial!

So, I ask...what is that little thing that you do or say that makes you unique?  Think about it...

That thing is most likely the very thing you can use in each and every audition to make you standout.

I recall being in the audition room for a Lottery Commercial.  I walked in the small room to a startling group of maybe 8-10 people (producing team).  This totally through me off.  It was the first audition!  Usually I see those many people on a call back.  But nope.  They were all their cramped together in that small room.  On my first take I completely flubbed the lines.  They'd also chosen to light the room with all of the lights they could find in the city!!! So I was sweating puddles.  This was going bad fast.  It was my second take (they were nice enough, despite the sweat puddles underneath my arms and running make-up) to let me do another take. So I began reading the copy again, I was at the start of a new flub over one word that just wouldn't come out right, and out of nowhere, the real me comes out!  I was trying to say the word, but "JESUS CHRIST!" came out in a very flabbergasted, sistagirl kinda way.  A sista whose just given up!  All 8-10 of the producing team and the casting director burst out laughing as I finished the line with the same attitude as I had when I'd called out God's son! I was so for sure I hadn't book that job.

FOR MORE TRICKS OF THE TRADE, SIGN-UP FOR MY UPCOMING COMMERCIAL AUDITION'S CLASS IN OCTOBER!

These are words that come to mind… when describing Mildred “Squeaky Moore”. A Jack of all trades who possesses a true hunger for the art of acting. Hailing from Chicago Illinois Squeaky has been part of the theater world since a youth.  Through the love of the arts Squeaky became a major player in the Chicago theater scene.

In addition to formerly being a part of American Menu, the Chicago Theater Company’s Jefferson Award nominated cast, she also holds experience in producing, writing, and directing. These skills were demonstrated in GUUD  Timez, an improve show based on the 70’s sitcom Good Times. A woman with a heart for her community she created Act Like You Know, a one woman show addressing the issues of violence and peer pressure with preteens and teens. Under Squeaky Moore Productions it appeared throughout schools in the Chicago area.
Upon relocating to New York City her credits are considered The Masterpiece, a collection of works that cannot be denied or reckoned with. These credits include Off-Broadway, commercials, regional theater, and television. She is appearing in the upcoming movie Zoo, written by Ed Harris and featuring actors Tremaine Hopkins from Juice, Treach from Naughty by Nature, and JD from The Wire. In addition to at least three currently airing commercials, Squeaky is also filming a feature film titled Trakked. The film Father’s Day, which she portrayed the character professor Gills and executive produced along with her partner Ashley Shante’, was picked up by Magic Johnson’s new network Aspire. It debuted on the new TV series ABFF Independents hosted by Omari Hardwick. The world is truly her oyster and I feel honored to have interviewed her for this piece.

First of all I want to thank you for agreeing to this interview. There are several questions I wanted to ask regarding your craft.
What are three things you would like the audience to know about you?

What are three things you would like the audience to know about you?
“First, I am a short haired, hot wife and mother, who juggles the roles as actress and producer. A free spirit always searching for fun and positive energy.  Second, I am a children’s book author. I am currently working on pushing the first of 5 books, the first is titled, Who Am I. Who Am I, tells the story of a multi-ethnic boy named Michai, who after spending time with animals in the tropical rain forest across the world, questions his heritage. Third, I am a strong believer in this phrase; “You will have what you say!”

Where do you see yourself within the next five years?
“Ultimately, I hope to go mainstream in my acting career, which sounds typical of most actors’ dreams, but it is my wish. More specifically, to have a major recurring role as a Hot, kick A** lawyer, or a tough as nails detective. Lastly, have my books published, and every multi-ethnic person buying Who Am I, for their children.”

The link to Father’s Day trailer can be found on YouTube at http://www.youtube.com/watch?v=woJKyOML8g8&feature=plcp

Kanarian Kindred
“NO ONE OWES YOU ANYTHING, THEREFORE I ALWAYS FIND A WAY TO MAKE THINGS HAPPEN”
“I DON’T WAIT ON OTHERS OR BELIEVE IN EXCUSES. THE WORLD IS TRULY MY OYSTER” Instagram: @sincerekaye
http://kanariankindred.info
http://pinterest.com/kanarian/
http://www.linkedin.com/in/kanariankindred

Posted by Unknown at 6:41 AM No comments:

Shut Up and Just Act!

I Learned another valuable lesson on commercial/print set today.

The client usually comes with a vision; the way they want their commercial and print to be or look. It's great to come with ideas, but don't keep throwing out your ideas, especially after you see they aren't interested or haven't used any of them! And especially, be able to take the direction that they are giving to you! Their vision. Don't talk about your ideas so much, you are barely listening to direction. Just do your job and let them do theirs.